Hawk Rock sits on top of the eastern ridge. With a two hundred foot ascent from the forest floor this stone is positioned to witness the celestial events in the Eastern skies. Directly in front of this stone runs wall north to south and to its immediate right a U-shaped structure. It is understood that these U-shaped structures were viewing seats for Sachem during the year through growing cycles. 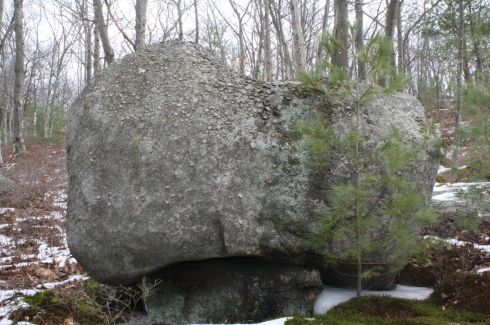 This protruding head could be that of a screaming Eagle or hawk. 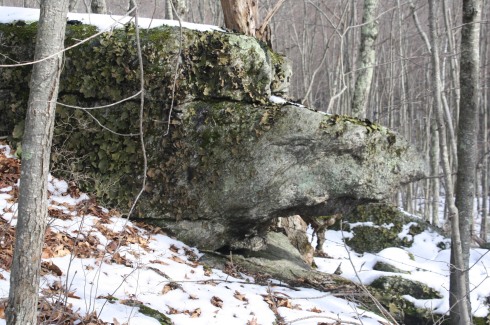 This bird appears in flight with its head (on the left) slightly caulked to the right . The wing is out stretched to the right of the photo. Smaller stones are positioned below to balance the stone in place.

This Hawk or Eagle head is from on solid piece of stone. A white quartz stripe runs diagonally right to left across the center of the stone. It reaches the top of the stone in the area of the birds eye. Following the top of the stone to the right and down ( the beak) to the ground completes the front half of the side profile.

This is one of three stones used to prop up a stone weighing over 300 tons. Its shape is of a birds head. 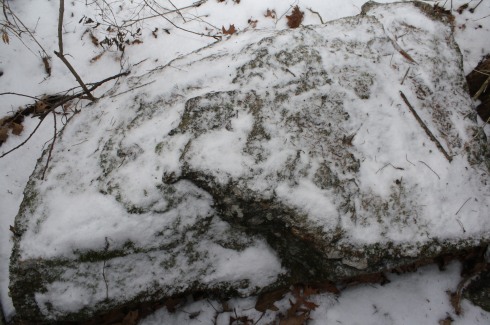 This is a propped stone shaped into a flying bird.  Notice the white quartz strip running up the center of the stone. The top of the quartz stripe again meets the eyes position in the animals body. The wings are stretched back and spread while the narrow profile of the birds body can be seen below.

Stones of the Past

Hidden in Our Landscapes, Lost with Time